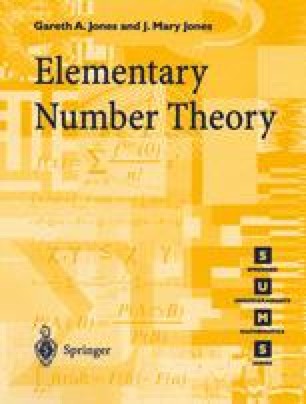 In this final chapter, we will discuss one of the classic problems of number theory, whose solution in 1993 by Andrew Wiles must be considered one of the greatest achievements of modern mathematics. Although the problem was first posed in the 17th century, its roots can be traced back, through the Greek mathematicians Diophantos and Pythagoras, to the unknown Babylonian mathematicians who recorded their results on clay tablets nearly four thousand years ago.

Elliptic Curve Rational Solution Integer Solution Bernoulli Number Opposite Parity
These keywords were added by machine and not by the authors. This process is experimental and the keywords may be updated as the learning algorithm improves.
This is a preview of subscription content, log in to check access.