Advances in Prostaglandin, Leukotriene, and other Bioactive Lipid Research 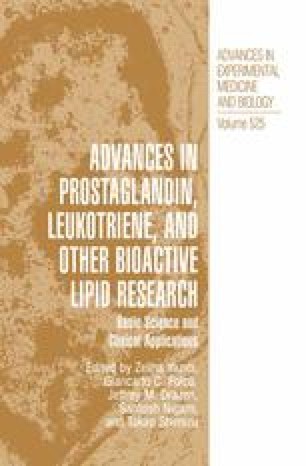 Advances in Prostaglandin, Leukotriene, and other Bioactive Lipid Research pp 39-46 | Cite as

The CYP P450 Arachidonate Monooxygenases: Enzymatic Relays for the Control of Kidney Function and Blood Pressure

During P450-dependent metabolism, arachidonic acid (AA) is: a) hydroxylated at its ω or ω-1 carbons to 19- and 20-hydroxyeicosatetraenoic acids (HETEs)(AA ω/ω-1 hydroxylase), or b) epoxidized at any one of its four olefins to 5,6-, 8,9-, 11,12-, or 14,15-epoxyeicosatrienoic acids (EETs)(AA epoxygenase). The demonstration that many of these P450- derived eicosanoids, were formed endogenously by several rat, rabbit, and human tissues, and that they were present in human and rat plasma and/or urine, established the P450 AA monooxygenase as a formal metabolic pathway, and stimulated an extensive functional characterization of its metabolites [1, 2, 3, 4, 5, 6, 7]. During the last 15 years, the list of biological activities attributed to the P450-eicosanoids has increased at a rapid pace, and led to an extensive in vitro characterization of their vasoactive properties, roles in cell and organ ion transport, and of their participation in hormone signaling cascades [1, 2, 3, 4, 5, 6, 7]. In male Sprague-Dawley rats, AA ω/ω-1 hydroxylation and epoxidation account for 70–80, and 20–30% of the total kidney microsomal monooxygenase activity, respectively, and 20-HETE and 11(R), 12(S)-EET (88% optical purity) are recovered as the major ω-hydroxylase and epoxygenase metabolites, respectively [[3]]. The high degree of structural homology displayed by the members of a P450 gene family [8] has complicated the identification of the P450 isoforms responsible for the metabolism of endogenous AA pools [[3],[5],[9]–[11]]. Nevertheless, extensive enzymatic, biochemical, immunological, and functional evidence indicates that CYPs of the 2 and 4 gene families are responsible for AA metabolism, and that, in rat kidney, CYPs 2C and 4A are the predominant and functionally significant AA epoxygenases and ω/ω-1 hydroxylases, respectively [[3],[9]–[19]]. For example, CYPs, 2C23, 2C24, and 2C11 are expressed in the rat kidney in decreasing order of abundance [[17]] but, of these, only CYP 2C23 metabolizes AA with a regio- and enantioselectivity that matches that of the microsomal enzymes [[16],[17]]. Furthermore, as shown in Figure 1,antibodies raised against CYP 2C23 inhibited better than 95% of the microsomal epoxygenase activity present in rat kidney microsomes, and had no effect on microsomal AA ω/ω-1 hydroxylation. The recognition of CYPs 2C and 4A as endogenous AA epoxygenases and ω/ hydroxylases, as well the early proposal of a role for these isoforms in the pathophysiology of experimental hypertension [1,[4]–[7]], open the way to the introduction of molecular approaches for the study of the functional roles of the AA monooxygenases, and the characterization of P450-isoform/gene-dependent phenotypes of renal dysfunction.

Arachidonic Acid Salt Sensitive Hypertension Epoxyeicosatrienoic Acid Plasma Androgen Level Endogenous Arachidonic Acid
These keywords were added by machine and not by the authors. This process is experimental and the keywords may be updated as the learning algorithm improves.
This is a preview of subscription content, log in to check access.