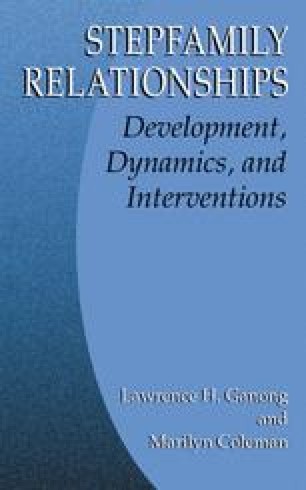 Estimates of the number of gay and lesbian couples are likely to be lower than the actual number because identifying oneself publicly as part of a gay or lesbian couple may be riskier than coming out of the closet as an individual (Bryant & Demian, 1994; Kaiser Family Foundation, 2001). Based on data from the latest U.S. Census (2002), 301,026 households were headed by a male householder and a male partner and 293,365 households were headed by a female householder and a female partner. Some of these are long-term relationships—between 8% and 21% of lesbian couples and between 18% and 28% of gay couples have lived together 10 or more years (Blumstein & Schwartz, 1983; Bryant & Demian, 1994; Falkner & Garber, 2002; Kurdek, 2004; The Advocate sex poll, 2002).

Nonresidential Father Lesbian Couple Kaiser Family Foundation Genetic Parent Lesbian Mother
These keywords were added by machine and not by the authors. This process is experimental and the keywords may be updated as the learning algorithm improves.
This is a preview of subscription content, log in to check access.