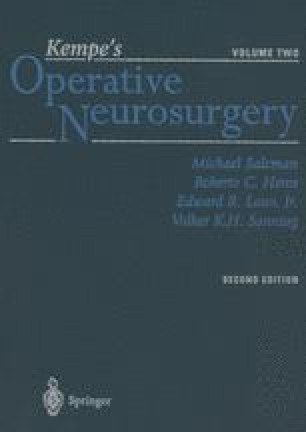 Indications for carotid endarterectomy are generally well established: moderate to severe carotid stenosis with ipsilateral transient ischemic attacks or amaurosis fugax, ipsilateral mild or moderate stroke with good recovery or high-grade asymptomatic disease in relatively young and healthy patients. We prefer to do the operation under general anesthesia and use electroencephalographic (EEG) monitoring to determine when to shunt, although many surgeons prefer regional and/or local anesthesia and either no monitoring or routine use of an intraoperative shunt. The skin incision is made along the lower anterior border of the sternocleidomastoid muscle with the upper part of the incision gently curving backwards toward the mastoid at a point about two finger breadths below the angle of the jaw, to avoid injury to the mandibular branch of the facial nerve (Fig. 41-1). The incision is carried sharply through the platysma, carefully avoiding injury to the great auricular nerve, which runs just deep to the platysma in the superior-most aspect of the incision. Dissection is then continued along the anterior aspect of the sternocleidomastoid muscle until the internal jugular vein is identified. In this plane, the descending branch of the hypoglossus nerve (ansa cervicalis) is identified. The dissection plane is between the internal jugular vein laterally and the ansa medially (Fig. 41-2). The common carotid artery (CCA) is then identified inferiorly and a tape is passed around for its control at this point. The surgeon must be careful to dissect in the plane between the CCA and the vagus nerve, which runs posterior to the artery and avoid injury to the nerve. The plane of dissection is then continued superiorly to the carotid bifurcation where the common facial vein is commonly encountered.

Common Carotid Artery Internal Jugular Vein Carotid Endarterectomy Sternocleidomastoid Muscle Superior Thyroid Artery
These keywords were added by machine and not by the authors. This process is experimental and the keywords may be updated as the learning algorithm improves.
This is a preview of subscription content, log in to check access.