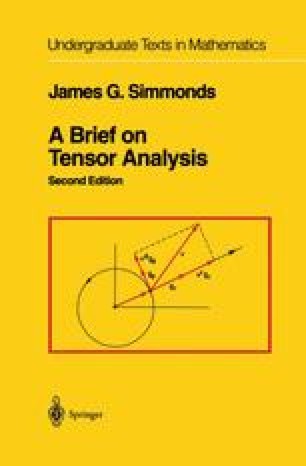 While the laws of mechanics can be written in coordinate-free form, they can be solved, in most cases, only if expressed in component form. This requires that we introduce a basis. Though the standard Cartesian basis is often the simplest, the physics and geometry of a problem, and especially the so-called boundary conditions, may dictate another. For example, if we wished to study the temperature distribution in a body the shape of a parallelepiped, we would choose most likely a basis consisting of vectors lying along three co-terminal edges of the body. An aim of tensor analysis is to embrace arbitrary coordinate systems and their associated bases, yet to produce formulas for computing invariants, such as the dot product, that are as simple as the Cartesian forms.

Extended Form General Basis Order Tensor Summation Convention Tensor Analysis
These keywords were added by machine and not by the authors. This process is experimental and the keywords may be updated as the learning algorithm improves.
This is a preview of subscription content, log in to check access.