Hormonal and Genetic Basis of Sexual Differentiation Disorders and Hot Topics in Endocrinology: Proceedings of the 2nd World Conference 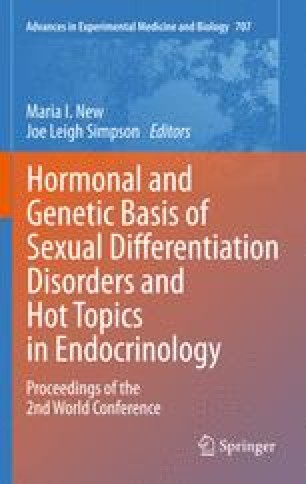 Hormonal and Genetic Basis of Sexual Differentiation Disorders and Hot Topics in Endocrinology: Proceedings of the 2nd World Conference pp 111-113 | Cite as

Gain-of-function mineralocorticoid receptor (MR) mutations and loss-of-function glucocorticoid receptor (GR) mutations are accompanied clinically by elevated blood pressure. This brief presentation explores how clinical studies have proven prismatic in terms of the evolution of MR and the implications for the pathogenesis of ACTH-induced hypertension. In 2000 Geller et al. published their findings on a point mutation in the gene encoding human MR, leading to a single amino acid substitution (S810L) and producing juvenile hypertension exacerbated by pregnancy (Science, 289 (5476):23–26). MR mutations in affected subjects are constitutive partial agonists, reflecting the proximity of and interaction between Ala 773 and the mutant Leu 810. Iterative Bayesian analyses of possible evolutionary trees do not distinguish between any of the four members of the steroid receptor subfamily (MR, GR, AR, and PR) as the first to branch off the putative ancestral protein.

Glucocorticoid Receptor Mineralocorticoid Receptor Single Amino Acid Substitution Zona Glomerulosa Affected Subject
These keywords were added by machine and not by the authors. This process is experimental and the keywords may be updated as the learning algorithm improves.
This is a preview of subscription content, log in to check access.