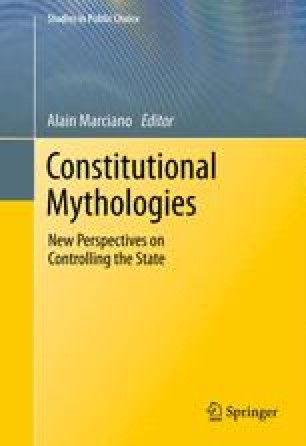 Human societies function correctly, at least in part, because the individuals who belong to them share some common beliefs about their origins, foundations and, as far as social sciences and political economy is concerned, how interactions are organized. These beliefs that are also called “myths” are therefore fundamental. They perform one or several functions – namely allowing societies to exist and to be ordered – that are independent from their empirical validity. We do not mean that such beliefs are and have to be “wrong” to be efficient. But rather that their importance does not come from the fact that they would be “exact” or “true.” Certainly, when these beliefs have emerged, myths may have been related to specific events. But it does not necessarily matter, for their efficiency or for their effectiveness, whether or not myths are actually related to historical facts. Thus, foundational “myths” – these stories that explain the origins of societies – tend to become widely held and, at the same time, might be false.

Public Choice Social Contract Direct Democracy Coercive Power European Constitution
These keywords were added by machine and not by the authors. This process is experimental and the keywords may be updated as the learning algorithm improves.
This is a preview of subscription content, log in to check access.