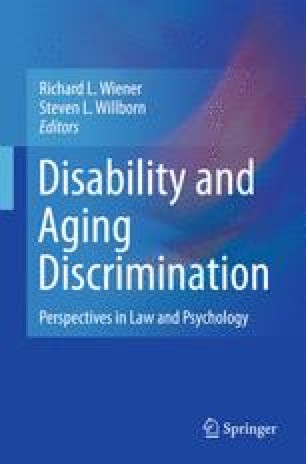 When I was asked to write a commentary chapter for the work by Stewart Schwab and Garth Glissman (Chapter 8 on Disability) and John Dovidio, Lisa Pagotto, and Michelle R. Hebl (Chapter 9, on Race), I was flummoxed. What could I contribute to the fine work of eminent scholars on the topic of stigma, particularly as it relates to discrimination and public policy? Chapter 8 focuses on the similarities and differences between disability definitions, discrimination, and legal protections and other forms of stigma, such as age, sex, and race definitions and discrimination. The review of the legal issues inherent in defining and responding to treatment, based on stigma, by Glissman, Schwab, and Willborn provides a foundation for future research on the psychological processes attending legal decision making on these issues.

Mental Illness Dominant Culture Evil Spirit Outgroup Member Social Touch
These keywords were added by machine and not by the authors. This process is experimental and the keywords may be updated as the learning algorithm improves.

He (Sitting Bull) heard a voice from above, so he looked there, he said: ‘These have no ears,’ he said, and he looked beneath the sun; like so many grasshoppers, with heads down they came; that is what he saw, he said. ‘These, they will die, but you must take none of their possessions from them, he said

Some visions are too powerful to follow, unless you know what you are doing. Only those who are chosen should seek the visions, because evil spirits can do terrible things to you. I have seen it.

Hallucinations are false perceptions. They can be visual (seeing things that aren’t there), auditory (hearing), olfactory (smelling), tactile (feeling sensations on your skin that aren’t really there…

This chapter is dedicated to my 87 year old Cherokee cousin, Kay Owen, who lived in Henryetta, Oklahoma, not far from where our Brown family originally settled in Indian Territory. She taught me well. Wado.