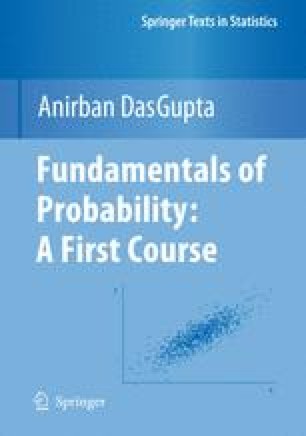 Fundamentals of Probability: A First Course pp 343-378 | Cite as

In many applications, successive observations of a process, say X 1, X 2,…, have an inherent time component associated with them. For example, the X i could be the state of the weather at a particular location on the i th day, counting from some fixed day. In a simplistic model, the state of the weather could be “dry” or “wet,” quantified as, say, 0 and 1. It is hard to believe that in such an example, the sequence X 1, X 2,… could be mutually independent. The question then arises how to model the dependence among the X i ′s. Probabilists have numerous dependency models. A particular model that has earned a very special status is called the Markov chain. In a Markov chain model, we assume that the future, given the entire past and the present state of a process, depends only on the present state. In the weather example, suppose we want to assign a probability that tomorrow, say March 10, will be dry, and suppose that we have available to us the precipitation history for each day from January 1 to March 9. In a Markov chain model, our probability that March 10 will be dry will depend only on the state of the weather on March 9, even though the entire past precipitation history was available to us. As simple as it sounds, Markov chains are enormously useful in applications, perhaps more than any other specific dependency model. They also are independently relevant to statistical computing in very important ways. The topic has an incredibly rich and well-developed theory, with links to many other topics in probability theory. Familiarity with basic Markov chain terminology and theory is often considered essential for anyone interested in studying statistics and probability.We present an introduction to basic Markov chain theory in this chapter.

Markov Chain Stationary Distribution Markov Chain Model Transition Probability Matrix Stationary Markov Chain
These keywords were added by machine and not by the authors. This process is experimental and the keywords may be updated as the learning algorithm improves.
This is a preview of subscription content, log in to check access.