Theory and Applications of Stochastic Processes 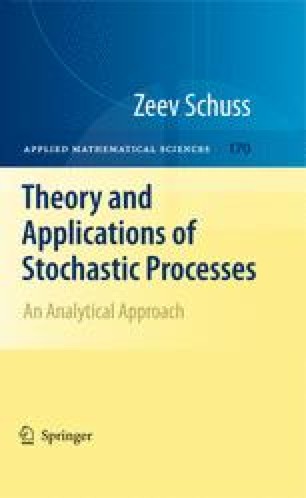 Theory and Applications of Stochastic Processes pp 302-338 | Cite as

The diffusion approximations to Markovian jump processes, which are obtained by truncating the Kramers–Moyal expansion of the master equation after two terms, are often valid only on time scales that are significantly shorter than stochastic time scales of the jump process, such as the time to a rare event. These approximations may be useful as local approximations, but are not useful for estimating the probability of a large deviation or the mean first passage time to the boundary of a domain of attraction of a stable or meta-stable state. It is the purpose of this chapter to develop a methodology for constructing analytical approximations to the pdf of Markovian jump processes that are valid also in the tail regions and to mean first passage times to tail regions.

Asymptotic Expansion Master Equation Moment Generate Function Boundary Layer Equation Large Deviation Principle
These keywords were added by machine and not by the authors. This process is experimental and the keywords may be updated as the learning algorithm improves.
This is a preview of subscription content, log in to check access.