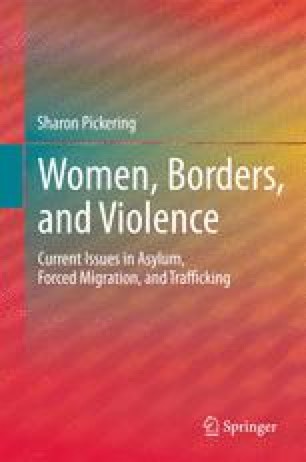 The Journey to the Border: Continuums of Crossing

The focus of this chapter is the impact of violence on women’s capacity to cross national borders. The aim is to better understand crime, violence and mobility in relation to women fleeing what many regard as a collapsed state and site of one of the world’s most intractable conflicts: Somalia. We approach this subject by considering women’s experiences of conflict and the conditions surrounding their exit, their transit through refugee camps and/or neighbouring countries, and their reception in countries of asylum or the Global North. We argue that an increase in the number of women fleeing conflict zones such as Somalia is occurring at the same time that extra legal border crossing is becoming increasingly difficult and dangerous. We also argue that the conditions of exit, transit and reception are shaped by both organised and opportunistic crime. Green and Ward (2009) have recently termed crime which serves both organised and opportunistic goals as “dual purpose” criminality. Ordinary, political or indeed dual purpose criminality effectively acts as a border policing apparatus that controls women’s mobility, thus gatekeeping women’s access to other countries, and in many cases access to legal remedies and protection. Such criminality can be enacted by organised political groups, militia, individuals or groups from opposing clans, government agents, smugglers and traffickers, or can take the form of the structural violence entailed in reception processes in places like Malta. Such criminality largely controls the nature of the border crossing experience for women fleeing Somalia. Furthermore, this criminality may be regarded as a form of political, cultural, organised and individualised policing of women’s mobility that routinely employs practices of rape and sexual violence.

Sexual Violence Asylum Seeker Refugee Camp Refugee Woman Somali Woman
These keywords were added by machine and not by the authors. This process is experimental and the keywords may be updated as the learning algorithm improves.

This chapter was co-authored with Alison Gerard, Monash University.