A Grammar of Shakespeare’s Language 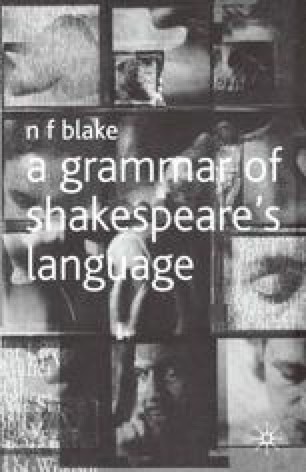 A Grammar of Shakespeare’s Language pp 1-14 | Cite as

Shakespeare lived from 1564 to 1616. His earliest and his final years were spent in Stratford-upon-Avon, but during his middle years he was in London, though he may occasionally have lived elsewhere (Honigmann 1985). During his early years in Stratford he attended the grammar school until he was about 15, and not long afterwards in 1582 he married Anne Hathaway. The details of his career in London, where he must have arrived in the late 1580s or early 1590s, remain uncertain, but he was writing plays and poetry from an early age; however, it was the latter which was published early, not long after his arrival in London.

Title Page Grammar School Syntactic Pattern Linguistic Background Modern Edition
These keywords were added by machine and not by the authors. This process is experimental and the keywords may be updated as the learning algorithm improves.
This is a preview of subscription content, log in to check access.