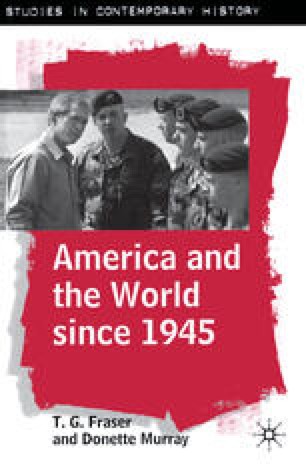 Bush: A Baptism of Fire

The divisive 2000 presidential election campaign and its controversial denouement provided an apt metaphor for America at the dawn of a new millennium — prosperous and powerful, adrift, insecure and apathetic; divided about the past and uncertain about the future. After months of tedious and often policy-challenged campaigning, the outcome ultimately turned on the candidate perceived least negatively by the largely unmoved electorate (and several thousand ballots in Florida). Calling the election first for Gore, the high-tech media which has, over the last several decades, become such an integral part of the whole affair, retracted and named Bush the winner. Finally, after announcing that this too could not be confirmed, they settled on a ‘wait and see’ policy. Hours turned into days and days into weeks as the lawyers, and, finally, the Supreme Court battled over voting procedures, counts and ballots. By the time George W. Bush emerged as the forty-third president of the United States, exhausted, and not just a little embarrassed, America breathed a sigh of relief. For the majority of the voting public, Bush may not have been the preferred candidate, but he was the product of a democratic system that had worked in the end, albeit imperfectly.

The enemies of liberty and our country should make no mistake: America remains engaged in the world by history and by choice, shaping a balance of power that favors freedom. We will defend our allies and our interests. We will show purpose without arrogance. We will meet aggression and bad faith with resolve and strength. And to all nations, we will speak for the values that gave our nation birth.