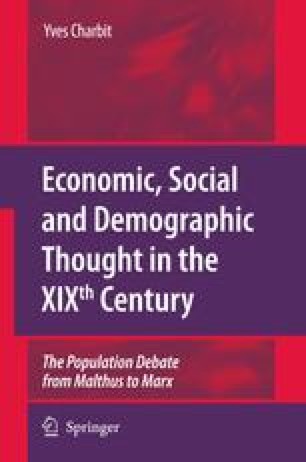 Economic, Social and Demographic Thought in the XIXth Century pp 93-119 | Cite as

The Malthusian Trap: The Failure of Proudhon

All through the nineteenth century, the two progressions of Malthus’ Essay on the Principle of Population proved to be a dangerous trap for the social reformers nurtured by the heritage of the Enlightenment and the French revolution of 1789. It was believed that the pressure of population on the means of subsistence acted like a noose that becomes tighter when population grew too fast and all attempts to redistribute wealth in a more egalitarian manner came to nought. Such is the meaning of the allegory of the banquet figuring in the second edition of the Essay published in 1803 which was later dropped by Malthus because it seemed inhuman.

Free Trade Moral Philosophy Geometrical Progression Social Criticism Fertility Control
These keywords were added by machine and not by the authors. This process is experimental and the keywords may be updated as the learning algorithm improves.
This is a preview of subscription content, log in to check access.