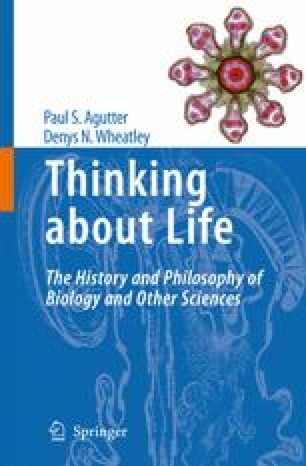 The Scientific Status of Biology

Today, physics and biology share all the general features of science that we surveyed in Chapter 1 (naturalism, mechanism, progressiveness, etc.). Everyone now agrees that living matter obeys all and only the laws of physics and chemistry. This consensus was achieved relatively recently; as we have seen, biology did not shake off the last vestiges of Aristotelianism until long after physics had become unassailably mechanistic. But it is clear that modern biology, like physics, is a science in the sense outlined in Chapter 1.

That may seem to imply that modern biologists and physicists think in much the same ways, produce knowledge that is similar in kind (allowing for differences in subject matter) and, as students, undergo comparable learning experiences. The data, however, suggest otherwise. If you ask science students ‘How does the study of physics contrast with the study of biology?’ they will answer along the following lines. Physics is mathematical, abstract, universal in application, not dependent on factual detail (except in specific applications) and concerned with essentially simple systems. Biology, in contrast, is qualitative, concrete, applicable only to terrestrial organisms, heavily burdened with factual detail and concerned with irreducibly complicated systems. When you study biology you have to think concretely and memorise numerous facts. When you study physics you have to master abstract reasoning and mathematical techniques. Physics and biology text-books and examination papers corroborate the distinction. This evidence indicates that physicists and biologists think differently, and that the kinds of knowledge they generate are dissimilar in kind as well as content.

Evolutionary Theory Moral Agent Scientific Status Moral Rule Modern Biology
These keywords were added by machine and not by the authors. This process is experimental and the keywords may be updated as the learning algorithm improves.
This is a preview of subscription content, log in to check access.