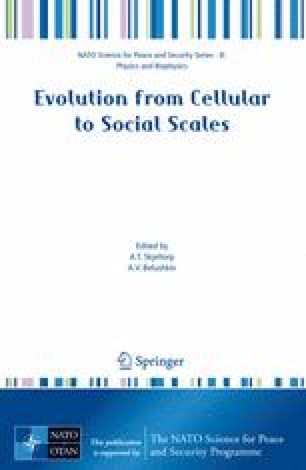 Evolution from Cellular to Social Scales pp 9-10 | Cite as

Conference paper
Part of the NATO Science for Peace and Security Series B: Physics and Biophysics book series (NAPSB)

Comparative studies of living organisms and their genomes, along with the fossil record, provide evidence for the history of life on Earth and the evolutionary processes that have shaped living systems. However, it can be difficult or impossible to resolve certain issues or test particular hypotheses given the inherent limitations in such observational data. The field of experimental evolution seeks to overcome these limitations by using model systems to test particular hypotheses and explore complex issues by means of rigorously replicated and controlled experiments. Model organisms typically have rapid generations, are easy to grow, can be stored in suspended animation, and are amenable to precise environmental and genetic manipulations.

In my group, we employ two experimental systems for studying evolution, ‘bugs’ and ‘bytes’. The former refers to microorganisms including the bacterium Escherichia coli (among others that we have studied). The latter refers to digital organisms — by which I mean computer programs that can self-replicate, mutate, and compete with one another — that evolve by the same fundamental processes that underlie evolution in nature.

The reference list below begins with two synthetic review articles; the first covers experimental evolution with bacteria and other microorganisms [1], while the second review explores experiments on digital organisms [2]. The next three papers report original research in these two systems; these should allow one to delve more deeply into the field of experimental evolution, in general, and the two experimental systems that we study in my group, in particular [3–6]. The final paper explores the future of evolution [7]. It identifies four areas for future investigation that, in my view, offer tremendous excitement: (i) the molecular genetic underpinnings of adaptation, (ii) the evolution of evolvability, (iii) artificial life as a model system for understanding evolution, and, most provocatively, (iv) artificial life as a future component of our evolving world.

Evolution experiments with microorganisms dynamics of adaptation and diversification parallel molecular evolution evolutionary biology
This is a preview of subscription content, log in to check access.