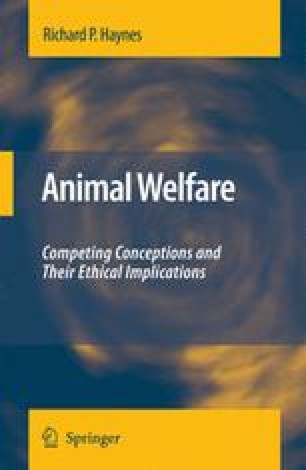 I have called this book “Competing Conceptions of Animal Welfare” for several reasons. Although Major C. W. Hume’s introduction of the expression “animal welfare” was resisted by many lab animal scientists in the US, who preferred to talk about “animal care,” the use of “animal welfare” came to be the dominant expression in the public dialogue about what care we owe the animals we use both in science and for food, vis., the Animal Welfare Acts of 1970 and 1985. Lab animal scientists in the US seemed to resist discussing the concept of animal welfare by deferring to the professional judgment of the expert. However, within the US there emerged a number of “animal welfare advocates” who called for reformed practices in the way that animals were currently used in science. These critics argued about how we should conceptualize “animal welfare.” In their view, current practices did not promote animal welfare. In this sense, they were promoting a different conceptualization of animal welfare that stood in competition to the one implied by current practices. In this context, animal welfare advocates distinguished themselves from “liberationist” or “anti-vivisectionists” or “animal rights” advocates by arguing that suitably reformed practices would make the use of animals in science morally acceptable. It has been my thesis that if we correctly conceptualize animal welfare, using a correct account of human welfare1 as our model, respecting the welfare of animals would require eliminating most of their use in science and all of their use when slaughtered for food. So true animal welfare advocates, if they correctly conceptualize “animal welfare” would be indistinguishable from “animal rightists.” That is one sense of what I mean by “competing conceptions.”

Animal Welfare Fair Deal Preference Satisfaction Farm Animal Welfare Animal User
These keywords were added by machine and not by the authors. This process is experimental and the keywords may be updated as the learning algorithm improves.
This is a preview of subscription content, log in to check access.