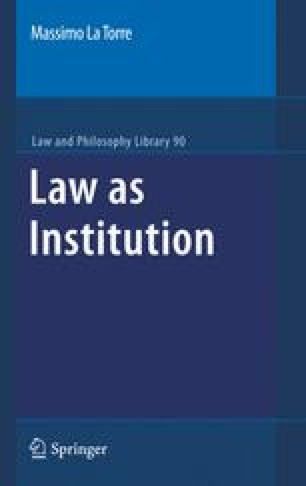 Here there is first an analysis of theories of meaning, their limits and merits and their possible consequences for the explanation of human action and for the concept of law. Several theories of meaning are assessed and finally the so-called use theory is outlined as the most convincing (though with some important caveats) and as the closest to the legal point of view. Actually the use theory thinks of “use” in terms very similar to legal notion of “custom” or “customary law”. For the use theory in a sense language is the same as “customary law”. However, “custom” here is not mere regularity, but eminently a normative game and a special room for action, a play of giving and asking for reasons. Recent developments in philosophy and in philosophy of law, especially rational pragmatism, discourse theory and inferentialism, seem to largely support this view.

Institutionalist Theory Legal Norm Behaviourist Theory Linguistic Expression Language Game
These keywords were added by machine and not by the authors. This process is experimental and the keywords may be updated as the learning algorithm improves.
This is a preview of subscription content, log in to check access.