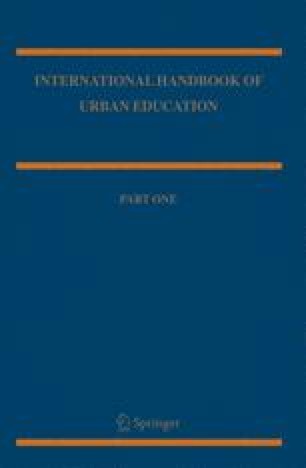 Urban Education Differentials and Marginalization: The Case of Educating the Youth in Nairobi's Informal Settlements

In this chapter, I will discuss an array of issues; the most pertinent being the disillusionment of many of Kenya’s urban poor who, like the majority of rural-urban migrants, moved to the city with the hope of finding jobs and improving their economic wellbeing as well as achieving new optimized opportunities. I will also look at how this hope for improved lives has been elusive for the parents and now for the children through a process of unrealized education objectives, massive drop-outs or push-outs, un-conducive learning environment due to area violence, dirt and filth, and lack of family support. This will provide some understanding of the plight of the many poor in urban areas and particularly in the informal settlements (slums) of Nairobi, Kenya. Other questions to be dealt with here include how the informal settlements themselves came about in a city that was originally planned for Europeans; how has the presence of these informal settlements perpetuated socio-economic inequalities in Kenya’s urban areas, and particularly in Nairobi, Kenya’s largest city; and what is being done and what should be done to bring about some form of social justice in the goals of “education for all” especially the youth from poor families – most of them in the large informal settlements of Kibera, Mathare, Korogocho, Mukuru?

Informal Sector Informal Settlement Socioeconomic Inequality Urban Migrant Street Child
These keywords were added by machine and not by the authors. This process is experimental and the keywords may be updated as the learning algorithm improves.
This is a preview of subscription content, log in to check access.