Hans Christian Ørsted And The Romantic Legacy In Science 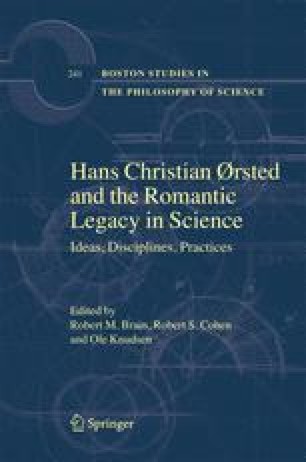 Chapter
Part of the Boston Studies In The Philosophy Of Science book series (BSPS, volume 241)

This paper began as something different from what it has turned out to be. I began by thinking I would try to show what aspects of Schelling’s work were influential in shaping Ørsted’s understanding of science and religion, suspecting that it was Schelling and not Kant who was important here. I will do some of that; in fact, I now think both Kant and Schelling were significant influences, although in different ways. But what I found myself really doing as I proceeded was thinking about Ørsted’s uniqueness, and that led me to think more about ways that Ørsted reflected wider issues in the development of science during the first half of the 19th century. To begin with, Ørsted’s career spanned a most amazing period, from the beginning of the century to its midpoint. The changes in German science in this period, to say nothing of the changes in the German states themselves, were profound.

Natural Science General Truth Scientific Materialism Fossil Bone Religious Sense
These keywords were added by machine and not by the authors. This process is experimental and the keywords may be updated as the learning algorithm improves.
This is a preview of subscription content, log in to check access.