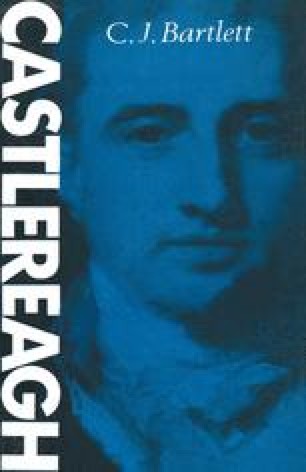 The Times remarked on Castlereagh’s appointment to the Foreign Office: ‘his name, above all others, is noted for mischance; he has been the very darling of misfortune’. Yet within a short time he had made himself so much at home in his new post that none but his most inveterate enemies thought of his removal, save to the Premiership, or as a result of the government’s overthrow. Before his appointment, his experience of foreign affairs had been enlarged by the general purview obtainable as a member of the cabinet, and by the specific aspects of foreign affairs that had involved him at the Board of Control and as Secretary of State for War. It is clear that he turned gladly from the affairs of India to those of Europe, even when entrusted with the Board of Control. His memoranda on war and peace with France in 1802–3 revealed an intelligent if sometimes rather academic appreciation of the problems. His next office thrust him into the heart of the struggle in Europe, and entangled him in the intricacies of power politics. In quick succession he grappled with Prussian hesitations, Sicilian ambiguities, Swedish eccentricities, and Spanish pride, all of which profoundly influenced British strategy.

British Government Slave Trade Peace Treaty Peace Negotiation Peace Settlement
These keywords were added by machine and not by the authors. This process is experimental and the keywords may be updated as the learning algorithm improves.
This is a preview of subscription content, log in to check access.