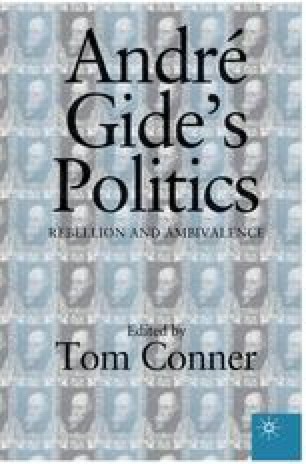 The political peregrinations of André Gide are emblematic of the pursuit of meaning through politics that many Western intellectuals engaged in during this century and especially during the 1930s and 1960s. More generally, as one of his biographers argues, he was “representative of the modern intellectual’s contradictory longing for individualist freedom and comforting submission to authority” (Guerard viii) as well as of “the isolation … , the sense of guilt, the schizoid anxiety of the modern intellectual—and his alternating impulses toward order and anarchy” (Guerard 13), to which one may add a combination of elitism and egalitarianism. Understanding Gide’s politics helps us understand the period and the writer, although of course the foolish political attitudes do not illuminate his nonpolitical writings, nor do they distract from his literary contributions.

Homosexual Activist Soviet System Soviet Society Mere Idea Soviet Citizen
These keywords were added by machine and not by the authors. This process is experimental and the keywords may be updated as the learning algorithm improves.

[T]here is something tragic about my Soviet experience. I had come as an enthusiast, as a convinced supporter, to admire the new world and to win my affections I was offered all the prerogatives I abominated in the old one.