Gender and Power in the Workplace 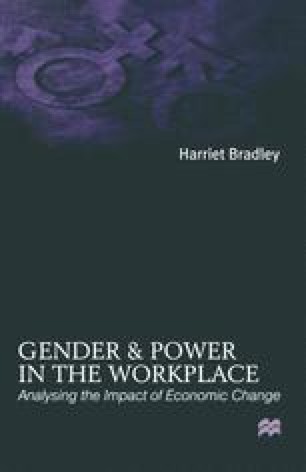 Sisters are Doing It…? Women in the Union

In the last chapter, it was suggested that trade unions continue to be linked with class meanings in the workplace and to play a part in processes of class identification. Such a link between unions and class is an historic one. In their role as the collective voice of working people, trade unions in Britain and elsewhere were among the few legitimate outlets through which members of the working classes could express their opinions, interests and needs before Parliamentary representation had been achieved. Marx and Engels, over-optimistically no doubt, believed that unions would be a vehicle through which the industrial proletariat would move from being a class in itself to a class for itself.

Sexual Harassment Trade Union Union Officer Male Colleague Class Interest
These keywords were added by machine and not by the authors. This process is experimental and the keywords may be updated as the learning algorithm improves.

‘Women have got to push themselves in the union. They cannot rely on men. They won’t get the support from men.’ (steward)

‘Women should be more involved. It’s easier for men. I still think there’s a little… slight prejudice, in the case of the older men. They don’t see it as women’s business.’ (female nurse)

‘Now that the branch secretary is a woman and the reps are mainly female… I think it has made a difference because there isn’t the selfishness there has been in the past. The men have a bias in the union to their own departments and their own sex.’ (steward)