The Dutch Republic in the Seventeenth Century 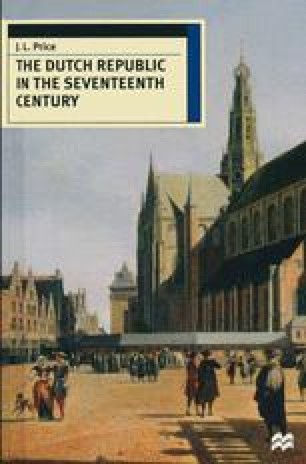 The Dutch Republic has had a bad press in one respect at least: the seventeenth century may have been a golden age in culture and an outstanding success economically, but the Dutch political arrangements of the time have not been admired. The central government is regarded as being so weak a system and so torn between competing provincial interests that it could hardly hold the state together, let alone pursue effective national policies. There have been two main strands to this criticism: Dutch nationalist historiography of the nineteenth and early twentieth centuries, and historians who have taken the centralising, absolutist state as the norm for the early modern period and have seen more traditional systems as anachronistic and necessarily doomed. The newly founded Kingdom of the Netherlands of the nineteenth century needed to justify its existence in opposition to the memory of the greatness of the Republic, and it did so by claiming that the centralised state and monarchy expressed the needs and interests of the Dutch nation far better than the fragmented Republic, where all-powerful provincial egotism had triumphed over national purpose. Such attitudes were reinforced by an interpretation of early modern European history which saw any resistance to absolutism as outdated and inefficient. From either point of view the political system of the Dutch Republic was an anomaly.1