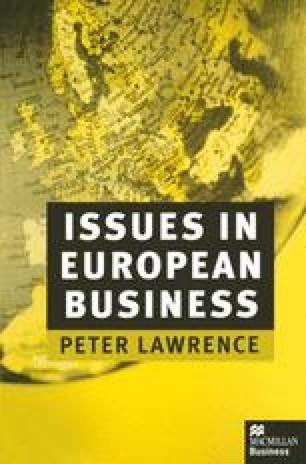 In the Todd Mall in Alice Springs in the middle of Australia (the mall is affectionately named after the chap who masterminded the overland telegraph, the town is named after his wife) there is one of those signposts that tells you the distance to faraway places. London is 15030 kilometres (9018 miles) away; Berlin, which lies in more or less the same direction, is a bit less far away, but not that much, so they seem to be close to each other. In other words, the closeness of two places depends on how far away from them you are. The same might be said of European management. In the previous chapter we detailed, even celebrated its heterogeneity. Yet if one adopts a suitably distant standpoint one might be rewarded with a homogeneous blur. So if one should ask whether there is any sense in which we can meaningfully speak of a European style of management, it is possible to answer yes — in spite of the differences paraded in the last chapter — if one compares Europe with some other substantial socioeconomic entity. Consider in this connection a possible comparison between Europe and Japan or the USA.