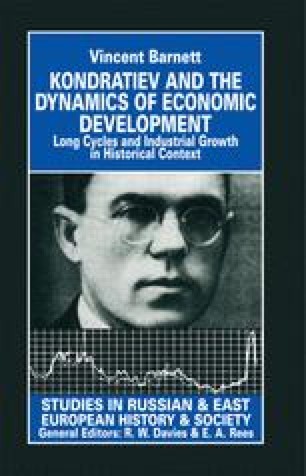 What has been argued throughout this book is that Kondratiev’s work was important both in a theory and policy sense, moreover that these different aspects of economics were for Kondratiev two sides of the same coin. This can be seen (for example) in Kondratiev’s concern with applying the long cycle to the analysis of grain export prospects for the USSR and to forecasts of changes in the international grain markets; in his concern to stress that economic planning was beset with fundamental flaws which limited the accuracy of any possible planning methodology, what was called the Kondratiev uncertainty principle; and in his view that transfers of capital between industrial branches was determined by the relative dynamics of conjuncture of the particular branches in question. This pioneering concern to integrate theory with policy can be seen as part of a larger movement in economics after 1900, which sought to move away from the ‘grand theory’ tendency of multi-volume accounts of the principles of economics, to more detailed analyses of specific empirical problems in economics such as business cycles and economic growth. The fact that Kondratiev was pursuing this approach from within the USSR suggests that the development of Soviet economics after 1929 could have been very different to that actually witnessed.

Business Cycle Western Economic Grand Theory European History Soviet Economic
These keywords were added by machine and not by the authors. This process is experimental and the keywords may be updated as the learning algorithm improves.
This is a preview of subscription content, log in to check access.