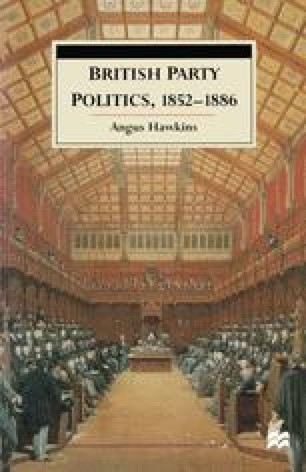 Crisis was not a word that immediately leapt to the minds of Liberal commentators in April 1880. The 1880 election returned the Liberal party to power with their largest nominal Commons majority since the 1832 Reform Act. Gladstone’s powerful denunciations of ‘Beaconsfieldism’ appeared to reignite popular passions, the Liberal politics of conscience reinvigorated with a transcendent moral cry. Crisis seemed more prevalent in Conservative circles as painful post-mortems inevitably followed electoral disaster. Disraeli’s death in 1881 compounded Conservative difficulties. Yet, within six years, the Liberal party was split asunder. The Home Rule crisis of 1886 stands alongside 1846 as a dramatic moment of fundamental party realignment. Party connections were redrawn as Liberal Unionists, including Hartington and Chamberlain, split away from Gladstonian Home Rulers. The crisis recast party sentiment for decades to follow.