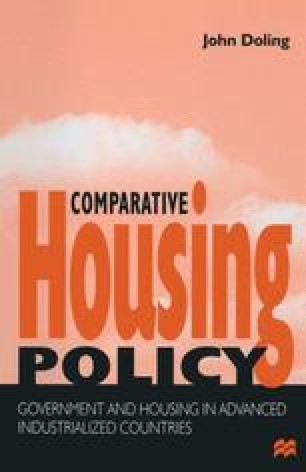 In many industrialized countries tenure is one of the most significant dimensions of housing and housing policy. It is through tenure that issues of achievement and failure are frequently discussed. In the literature, that produced both by individual researchers writing at the level of their own country and by international organizations writing and comparing across countries, reference to and analysis of tenure is common place. So, in one country tenure developments over time are studied, whereas for a number of countries their patterns of tenure are compared, perhaps as the basis of some categorization. Texts on housing policy are invariably organized, at least in part, around tenure chapters. In short, tenure figures everywhere, and the literature to be drawn on is consequently more plentiful than for many other aspects of housing policy. Although it is everywhere, tenure does not provide a complete picture. Tenure describes the way in which real property is held and consumed. In Figure 3.1, tenure relates to stage 3 only, so that much that happens in production and re-production (maintenance and renovation) can happen independently of tenure (though this does not mean that it does not have consequences for tenure). But, in itself, the way in which housing is produced — by small or large company, speculatively or non-speculatively and so on — may not bear any direct relation with its subsequent use.