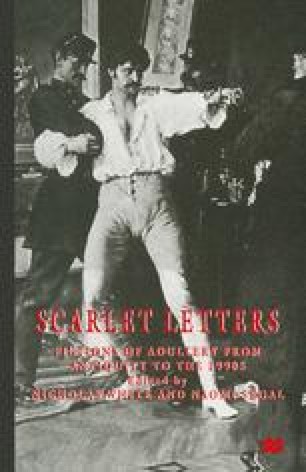 Ever since Denis de Rougemont’s famous study of the representation of desire in the West, it has been a critical commonplace to assert the permanence of the theme of adultery.1 More specifically, though, Tony Tanner’s account of such transgression in the ‘bourgeois novels’ of Rousseau, Goethe and Haubert is only the most famous of a number of analyses which highlight the particular urgency of the theme, which is seen as coincident with the rise of the middle classes in much of Europe and prior to the birth of Modernism.2 What needs to be defined is the relationship between the apparent ubiquity of the form and the historical specificity identified within the bourgeois novel. Tanner suggests that a shifting of social norms around the turn of the century is reflected in a ‘move from the more realistic novel of contract and transgression […] to what might be called the novel of metaphor’ (86). In his terms, ‘as bourgeois marriage loses its absoluteness, its unquestioned finality, its “essentiality”, so does the bourgeois novel’ (15). The disaffection with the ‘novel of contract and transgression’ which inspires the development of Modernist prose is sketched by Tanner in terms of a triple impulse, embodied by Lawrence, Proust and Joyce respectively.3

Love Affair Domestic Space Porous Interface Popular Fiction Incest Taboo
These keywords were added by machine and not by the authors. This process is experimental and the keywords may be updated as the learning algorithm improves.
This is a preview of subscription content, log in to check access.