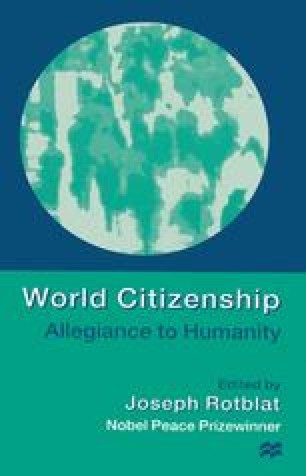 ‘Quasi-Nations’: The Scientific Community as a Component of a New World Order

In the title of this chapter reference is made to the scientific community, but I have primarily in mind the segment of it that I know best and to which I belong, namely the community of theoretical physicists and mathematicians, and, more specifically, those of them who work on Non-linear Evolution Equations and Dynamical Systems (NEEDS). This community is reasonably well-defined; it includes persons who by and large know each other personally and/or through the scientific literature, and who, most importantly, share a common set of scientific interests and knowledge. It is a highly international community, with a substantial participation from the former Soviet Union, North America, Europe (East and West, North and South), Japan, China, India, Australia, South Africa, Latin America and indeed the entire world.

Nuclear Weapon Irrational Belief World Order Entire World World Affair
These keywords were added by machine and not by the authors. This process is experimental and the keywords may be updated as the learning algorithm improves.
This is a preview of subscription content, log in to check access.