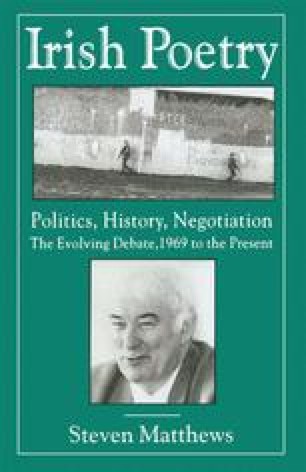 John Hewitt is in many ways the most concertedly traditional of the writers who published poems in response to events in the North of Ireland from the late 1960s onwards. His long writing career, extending from the mid-1920s to his death in 1987, was marked by what Seamus Heaney has called ‘an emphasis on the poet as maker, a concern for professional standards in the handling of form, a distrust of freedom and extravagance that has not been earned by toil within the traditional modes.’1 In his essay ‘Irish Poets, Learn Your Trade’ Hewitt himself outlines the virtues of tight form:

The couplet and the sonnet in particular, although they may admit resounding rhetoric, nevertheless are strict, limiting to the natural sprawl of words and ideas, involving compression, order, balance, the decorum of a stable tradition.2

Belated Emer Bitter Gourd Creative Mind Comfortable Pace Poetic Form
These keywords were added by machine and not by the authors. This process is experimental and the keywords may be updated as the learning algorithm improves.
This is a preview of subscription content, log in to check access.