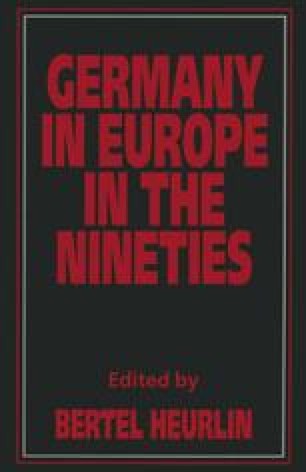 No Threats, No Temptations: German Grand Strategy After the Cold War

30 June 1995 was a watershed date in post-war German history. On that day, the Germans broke through the 40-year-old cocoon which had sheltered them so nicely against the pulls and pushes of world politics. By a comfortable margin, the Bundestag authorized the government to project force out of area — into the former Yugoslavia. Though the licence was not exactly a sweeping one,1 it was revolutionary. For it empowered the government to send German troops into combat for the first time since the Second World War.

Federal Republic Nuclear Weapon Constitutional Court Grand Strategy Force Projection
These keywords were added by machine and not by the authors. This process is experimental and the keywords may be updated as the learning algorithm improves.
This is a preview of subscription content, log in to check access.