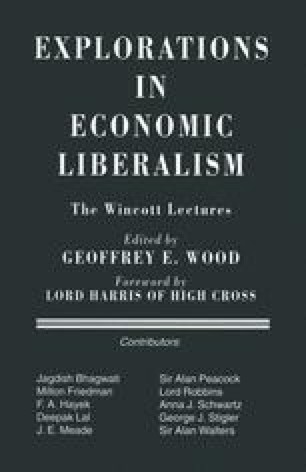 The Credibility of Liberal Economics

In 1836 at the close of an article in the London Review on ‘Whether Political Economy is Useful’, the protagonist of political economy, ‘Mr B’, whom James Mill uses to expound his views to ‘Mr A’, concludes with the resounding words:

The people, therefore, in the legislature, void of knowledge, who say they distrust and despise political economy, make no presumption against the doctrines against which they vent only a senseless noise. ... There is no branch of human knowledge more entitled to respect; and the men who affect to hold it in contempt afford indication only against themselves.1

Political Economy Welfare Economic Liberal View Liberal Economic Liberal Idea
These keywords were added by machine and not by the authors. This process is experimental and the keywords may be updated as the learning algorithm improves.

A number of colleagues read and commented on an earlier draft of this lecture, notably James Buchanan, Douglas Dosser, Ralph Harris, Keith Hartley, Graham Hutton, Michael Jones-Lee, Alan Maynard, Charles Rowley and Arthur Seldon. I am most grateful to them.