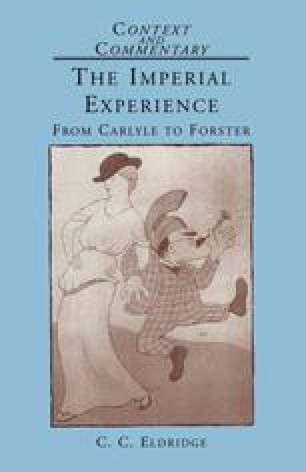 Chapter
Part of the Context and Commentary book series (COCO)

The 1880s witnessed the flowering of a new genre: for adults the imperial romances of Rider Haggard and for children the imperial adventure stories of G. A. Henty, Dr Gordon Stables and a host of others.

There has, indeed, arisen a taste for exotic literature: people have become alive to the strangeness and fascination of the world beyond the bounds of Europe and the United States. But that is only because men of imagination and literary skill have been the new conquerors, the Corteses and Balboas of India, Africa, Australia, Japan and the isles of the southern seas. All such writers […] have gone out of the streets of the over-populated lands into the open air; have sailed and ridden, walked and hunted; have escaped from the smoke and fog of towns. New strength has come from fresher air into their brains and blood; hence the novelty and buoyancy of the stories which they tell. Hence, too, they are rather to be counted among the romanticists than realists, however real is the essential truth of their books.