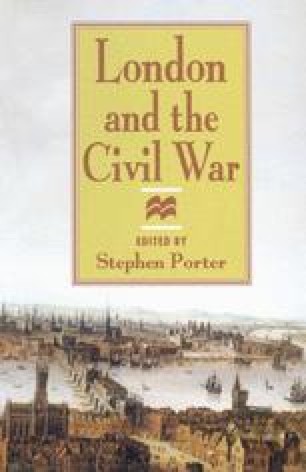 Political Funerals during the English Revolution

As the seat of government, and by far the largest concentration of population in the kingdom, the combined cities of London and Westminster were the natural stage for national political spectacles and displays of state power during the early modern period. In the hundred years between 1550 and 1650 London’s population had leapt from 120 000 to 375 000 inhabitants.1A great port and entrepôt for international trade, London also boasted extensive manufacturing of luxury goods, a developed hotel industry, and a strikingly diversified artistic and intellectual culture. These multifarious functions, as well as its role as the venue of the royal court, made the metropolis an ever more powerful magnet for England’s landed class. Every great courtier maintained his own household near Whitehall (most often in the Strand), each a miniature court in its own right, which functioned as the nerve centre for its own affinity. In addition, parliament, the law courts, speciality shopping and the allure of the budding London ‘season’, drew increasing numbers of gentlemen to build town houses in Westminster and its environs.2

Black Cloth Early Modern Period Double File Extensive Manufacturing Funeral Procession
These keywords were added by machine and not by the authors. This process is experimental and the keywords may be updated as the learning algorithm improves.
This is a preview of subscription content, log in to check access.