Stability in the Financial System 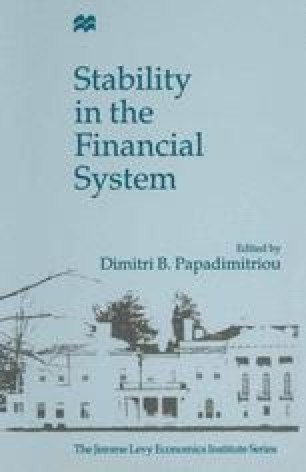 Stability in the Financial System pp 26-33 | Cite as

Professor Sylla provides a thoughtful perspective on the reasons for and significance of New Deal financial reforms, and an evaluation of their apparent success and future prospects. The scope of New Deal legislation is rivaled only by the financial development of the years immediately following ratification of the Federal Constitution, which Sylla uses to demonstrate that major financial reforms come only after severe crises. The reforms of 1789–92 were in response to a fiscal crisis: those of the New Deal in response to a financial crisis. Piecemeal adjustments, and some significant changes, such as the National Bank Act of 1863 and the Federal Reserve Act of 1913, occurred over intervening years, but none was as sweeping. Because I find Sylla’s interpretation of New Deal reforms generally persuasive, my comments will develop further some of the points he raises, as well as offer my own perspective on the success or failure of particular reforms.

Monetary Policy Federal Reserve Commercial Bank Investment Banking Deposit Insurance
These keywords were added by machine and not by the authors. This process is experimental and the keywords may be updated as the learning algorithm improves.
This is a preview of subscription content, log in to check access.