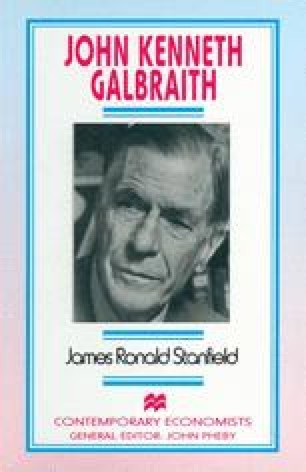 John Kenneth Galbraith, a leading scholar of the American institutionalist school, is the world’s most famous economist in the second half of the twentieth century. Among American economists of any era, he is rivalled only by Thorstein Veblen for the introduction of phrases that take on a life of their own in the literate idiom. Countervailing power, the conventional wisdom, the affluent society, the new industrial state, and the technostructure have become familiar even beyond Galbraith’s remarkably very wide readership. In the present century no other economist, excepting perhaps John Maynard Keynes, can claim so secure a place in the belles-lettres of the English-speaking world. This introductory chapter provides a brief biographical sketch of the man and his times, including an overview of his major works. It also offers a few tidbits to exemplify his fabled wit.

Nobel Laureate Economic Thought Introductory Chapter Affluent Society American Economic Association
These keywords were added by machine and not by the authors. This process is experimental and the keywords may be updated as the learning algorithm improves.

Ken Galbraith, like Thorstein Veblen, will be remembered and read when most of us Nobel Laureates will be buried in footnotes down in dusty library stacks.

This exemplary intellect has been the conscience of the economics profession (and sometimes its unhappy conscience) for more than a generation.