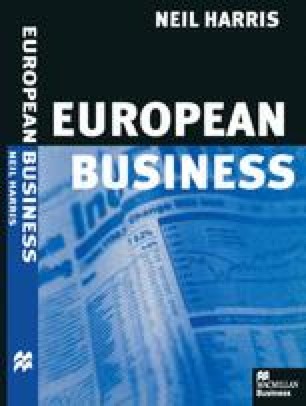 Change and the European business response

This chapter considers a number of issues which are likely to be of increasing importance to European business in the next ten years - which is as far ahead as anyone can possibly hope to predict. They are considered both from the macro approach of the policies of the EU and from the micro basis of individual businesses and how they respond within the European business environment. One area of increasing concern to European businesses and consumers is that of the environment. It is highly likely that in the next decade businesses will have to respond much more positively to environmental issues as a result of pressures from the EU itself, consumers and lobby groups such as Greenpeace. This will inevitably force businesses to look carefully at their production processes and the costs imposed by the need to effect change. Allied to this is the increasing awareness that businesses have an obligation to behave ethically rather than just seek to maximise profits. This may again have environmental aspects or it may relate to treatment of employees, including in third world countries by European multinationals. There may also be clashes with the EU, over competition and social policies. Both these issues are considered here.