Modernist Writers and the Marketplace 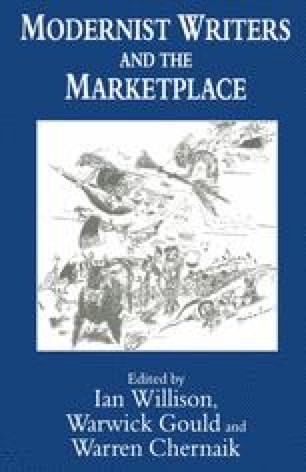 Modernist Writers and the Marketplace pp 105-123 | Cite as

When D. H. Lawrence returned to Europe from America in the autumn of 1925, he was (he knew) coming to the end of what had been, up till then, his most successful and profitable time as a professional writer.1 He had been living by his writing since 1912, and we can divide this part of his literary career into four periods. The first period, up to the outbreak of the First World War, had been at first reasonably and then increasingly successful. Though he had never earned very large sums from this English publishers (and even less from America), he had lived cheaply (mostly abroad) and his published books (The Trespasser, Sons and Lovers, The Widozving of Mrs Holroyd, Love Poems and The Prussian Officer stories) had successfully earned him enough to live on. I must stress, by the way, that throughout this paper when I use the word ‘successful’ I do not mean successful in the way that, for example, Compton Mackenzie or Arnold Bennett were – authors whose writing could earn them well over £1000 a year

Book Trade Book Market English Publisher Single Story Modernist Writer
These keywords were added by machine and not by the authors. This process is experimental and the keywords may be updated as the learning algorithm improves.
This is a preview of subscription content, log in to check access.