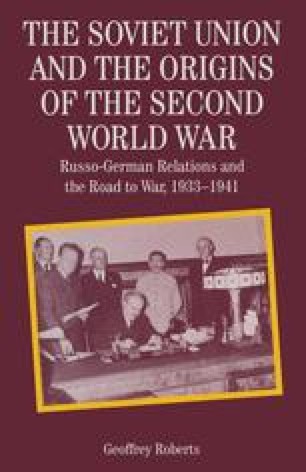 Confrontation versus Compromise: Dilemmas of Coexistence with Nazi Germany, 1935–1937

By the middle of 1935 Soviet-German relations were in as bad a state as they had ever been. Moscow’s view of the cause of this state of affairs was summed up in a letter from Litvinov to Suritz, the Soviet ambassador in Berlin, on 3 June 1935: ‘Hitler continues to fight against all efforts to organise collective security, for the basis of his policy remains, in accordance with his book “My Struggle”, the building of power and preparation for aggression, in the first instance in a South-Eastern and Eastern direction.’1