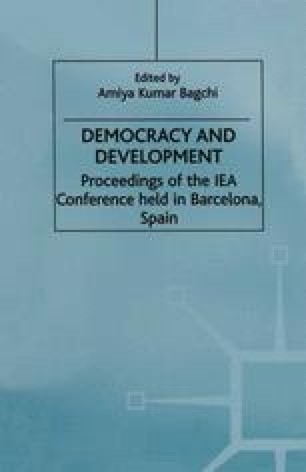 Democracy and Development pp 28-57 | Cite as

On the Relationship between Economic Development and Political Democracy

Until the mid 1970s, with the notable exceptions of India and Costa Rica, only highly developed economies enjoyed political democracy. Many theories have been proposed to explain this apparent relationship between development and democracy. I think they can be divided into two groups. The first consists of those theories based upon the growth of the power of a class, or the formation of a coalition of classes, in whose interests democracy, or extending the franchise to the masses, lies. Some argue, for instance, that the working class is the engine of democratic transformation, and working class power grows with development, which induces the formation of trade unions. Others argue that the bourgeoisie is the engine of democratic transformation — they need the masses to side with them against the landed aristocracy, and the bourgeoisie grows with development. For theories of this kind, Moore (1966) and Stephens (1994) provide a cogent account. The second category of theories explains the advent of democracy by some kind of change of preferences of citizens. For instance, with education, people come to value civil liberties more, and there is, therefore, an obvious relation between development and democratic yearnings.

Capital Stock Median Voter Civil Liberty Economic Equilibrium Voter Preference
These keywords were added by machine and not by the authors. This process is experimental and the keywords may be updated as the learning algorithm improves.

This chapter first appeared in Economic Design, 1994, no. 1, pp. 15–39. I have benefited from discussions with A. Alesina and M. Quinzii, from the comments of S. Barberà at the International Economic Association conference on democracy and development (1992), from the comments of Michael Whinston at the NBER political economy conference (1992), and from comments by participants at these conferences and at several university seminars. I am also grateful to José Cheibub for assembling the data in Table 2.1.