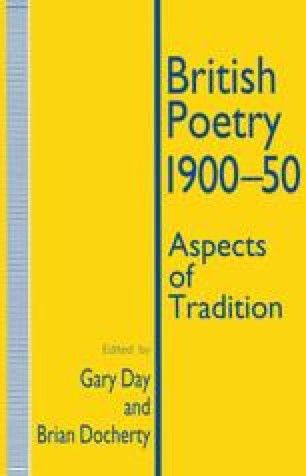 Lyrics of the First World War: Some Comments

This chapter attempts to argue two main points: first, that the poetry of the First World War was perceived as a homogeneous poetic kind from very early on in its history, and that publication in anthologies was both cause and consequence of this way of perceiving it; and secondly, that the characteristic lyric forms which the trench poets utilised are a necessary aspect of their meaning.

Subject Matter Literary Canon Trench Warfare Natural Vehicle Free Verse
These keywords were added by machine and not by the authors. This process is experimental and the keywords may be updated as the learning algorithm improves.
This is a preview of subscription content, log in to check access.