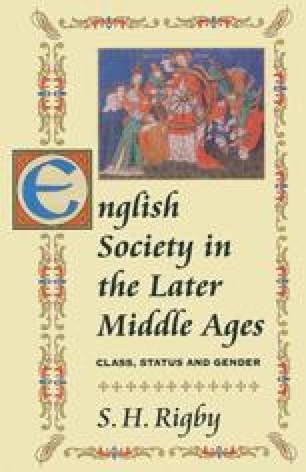 According to the mid-thirteenth-century Laws and Customs of England, people could be classified for legal purposes in two ways, firstly, into free and bond; secondly into ‘male, female or hermaphrodite’, although even hermaphrodites were said to be closer to either the male or to the female pole, ‘according to the predominance of their sexual organs’. The inequality of men and women was thus seen as a fundamental aspect of contemporary social structure: ‘women differ from men in many respects for their position is inferior to that of men’. A knowledge of such gender inequalities is vital for an understanding of social stratification in medieval England. ‘Gender’ refers to the ways in which the biological differences between male and female are transformed into the culturally specific and socially defined categories of masculine and feminine. Whilst the anatomical differences between the sexes are fixed, gender roles are culturally and socially fluid, varying according to time and place. We need, however, to distinguish between society’s gender ideology, the conceptions about the sexes current in religion, literature, learning and so on, and the reality of gender relations. As we shall see, there could often be a considerable disparity between medieval theories of gender and actual social practice. The social exclusion on the grounds of gender experienced by women was, although liable to variations in its form and degree, one of the most fundamental aspects of social stratification in medieval England.