The Transformation of the World Economy, 1980–93 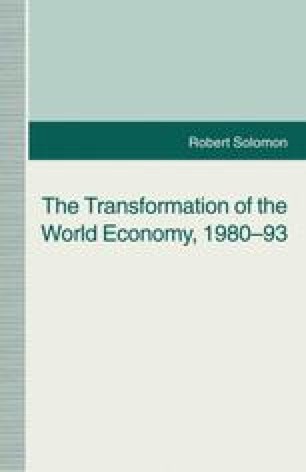 Problems and Promises of an Uncertain Future

To assert that the world looked very different at the end of 1993 from what it was in 1980 is an understatement. Who would have predicted in 1980 that the Soviet Union would cease to exist, that Russia would be attempting to privatise its state-owned enterprises or that Eastern Europe would be liberated to pursue democracy and free markets? Or that regions of China would become thriving market economies growing at a breathtaking pace? Or that the two Germanys would be unified and the process would create serious economic problems for western Germany? Or that François Mitterrand, after winning the presidency on a socialist platform would later in the 1980s be presiding over an economy hardly more socialist than its neighbours and having a strong currency and lower inflation rate than Germany? Or that Mexico would abandon its import substitution policies, open its economy to the rest of the world and have shares in some of its privatised companies traded on the New York Stock Exchange along with those of many other ‘emerging markets’?

Monetary Policy Industrial Country Central Bank Fiscal Policy European Central Bank
These keywords were added by machine and not by the authors. This process is experimental and the keywords may be updated as the learning algorithm improves.
This is a preview of subscription content, log in to check access.