Ageing and the Care of Older People in Europe 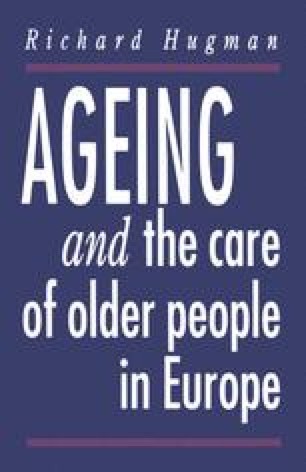 Analysis and discussion of the social roles and status of older people in Europe, as well as North America and Australasia, in recent years have been dominated by a concern about the extent to which ageing and older people are positively valued. As we have already seen, one strand of social gerontology has developed in response to perceptions of the loss of positive value, in the formulation of the modernisation theory (Cowgill and Holmes, 1972; Fischer, 1978; Gruman, 1978). Many more gerontologists, other professionals and older people themselves are critical of the phenomenon of ageism; that is, discrimination between people on grounds of age when this is not a relevant issue (Phillipson, 1982; Fogarty, 1986; Itzin, 1986; Walker, 1986b; Featherstone and Hepworth, 1990). Such ideas about ageing and older people not only influence the thoughts and actions of scientists, politicians and professionals but also pervade the whole of society, being reflected in everyday language. As such, the perception and experience of ageing is embedded in an array of social values, within which the identities of individuals and groups are structured and maintained (Goffman, 1971).