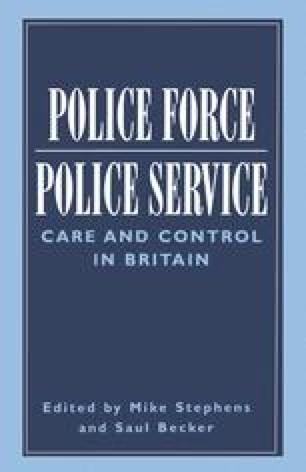 The Criminal Statistics for England and Wales in 1987 show that males under 17 years of age who were cautioned by the police averaged 66 per cent of all those cautioned and prosecuted. These national statistics, however, fail to reveal the local variations in police cautioning of juveniles. The lowest cautioning rate occurred in Staffordshire, where the police cautioned only 41 per cent of under 17 year old males and prosecuted 59 per cent. The highest rate belonged to the Northamptonshire Police, which cautioned 86 per cent of those cautioned or prosecuted (Home Office, 1987). This chapter will give an account of the processes whereby the Northamptonshire Police, by the late 1980s, were diverting more than 8 out of 10 apprehended juvenile offenders from the juvenile courts. The specific mechanism developed within that county, for the purposes of. increasing levels of diversion for delinquents, was that of the Juvenile Liaison Bureau (JLB). The JLB model of service was introduced as an experimental pilot scheme in two of Northamptonshire’s towns — Corby and Wellingborough — in 1980/1. The success of the JLB scheme in those areas was such that the procedures and practices developed there were implemented countywide by the mid-1980s.