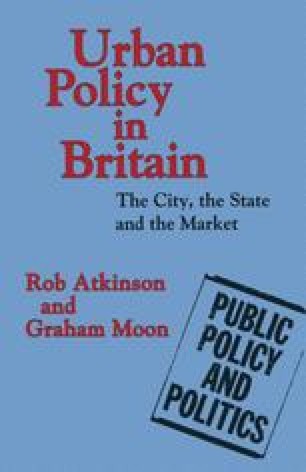 By the end of the 1980s it had been estimated that non-white people made up just under 5 per cent or 2.6 million, of the UK’s total population (Jones, 1993, p. 12). Of these people, about 2.2 million may be described as black or Asian. At the regional level the black and Asian population is unevenly distributed throughout the UK, with the vast majority concentrated in the South-East (including Greater London), the North-West and parts of the Midlands and Yorkshire (Jones, 1993, p. 16). At the subregional level we find a similar unevenness, with most black and Asian people living in urban areas, particularly in the major conurbations of England. Even within urban areas there is a high level of unevenness, with the black and Asian populations being highly concentrated in a small number of inner city areas where they have, on the whole, remained settled since the early 1950s (Jones, 1979; Robinson, 1991). This polarised spatial distribution is by no means accidental and relates to the nature of the employment and housing markets in which black and Asian people found themselves in the post-Second World War period.