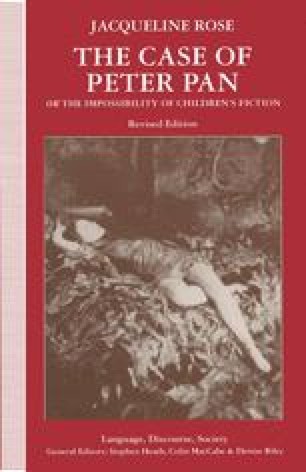 Innocence of the child and of the word
Chapter
Part of the Language, Discourse, Society book series (LDS)

In the first volume of Alan Garner’s four-volume Stone Quartet (Garner, 1976–8), Mary asks her father, a stonemason, for a book so that she can learn to read. His reply is to take her to Engine Vein, a crevice in the rocks where the miners’ railroad runs, and to send her down into the caves beneath to explore. What Mary finds is her father’s mason mark on the wall of a cave and a daubed bull. It was ‘the most secret place she had ever seen’ — a place where her father’s past and her present history were written, and where everything else converged. When Mary comes out of the cave: ‘The sky seemed a different place. All things led to the bull and the mark and the hand in the cave’ (Garner, 1976, p. 54). Her father takes her home and gives her a book made of stone. This book ‘unlike a book you can open’ which ‘only has one story’, contains ‘all the stories of the world’ (Garner, 1976, pp. 58, 61).

Fairy Tale Linguistic Sign Narrative Fiction Adventure Story Ofthe Child
These keywords were added by machine and not by the authors. This process is experimental and the keywords may be updated as the learning algorithm improves.

‘Now if he’d read rocks, instead of books, it might have been a different story, you see.’

Let there be no other book but the world … The boy that reads does not think, nor gain instruction, he only learns a parcel of words.