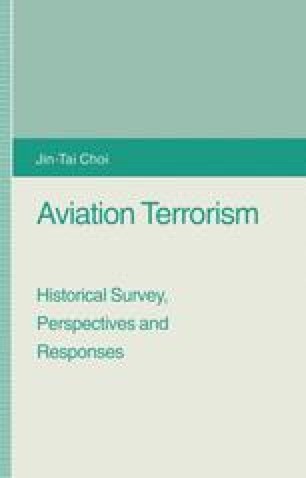 The hijacking of TWA 847 in June 1985 showed the international commun-ity that commercial aircraft and the aviation industry in general would remain a target of terrorists for as long as they sought to achieve their object-ives by terrorising the innocent in order to emasculate the mighty. This should have been predicted since aircraft hijacking had earlier been shown to have all the elements necessary to make it a useful medium for terrorists. Passengers can be used as hostages for bargaining purposes and good media coverage is almost always assured. The significance of the TWA hostage crisis is that passengers and aircraft have become mere pawns in the larger game of international politics. Governments have become the principal targets and attacks against airlines have become a major terrorist tactic. Unlike any previous incident, the hijacking of TWA 847 was a very compli-cated and confusing event because of the lack of effective authorities with whom the involved parties could deal. In fact, the Lebanese authorities had no real influence because of the unstable political situation in Lebanon. Consequently the TWA crisis was resolved primarily by diplomatic means between the states concerned rather than by negotiating directly with the hijackers. Procedures developed over previous decades to deal with this type of situation proved inapplicable. At the same time the event presented considerable dilemmas for the United States and Israel.

Civil Aviation Hague Convention International Terrorism Federal Aviation Administration Aviation Security
These keywords were added by machine and not by the authors. This process is experimental and the keywords may be updated as the learning algorithm improves.
This is a preview of subscription content, log in to check access.