Iraq: From Sumer to Saddam 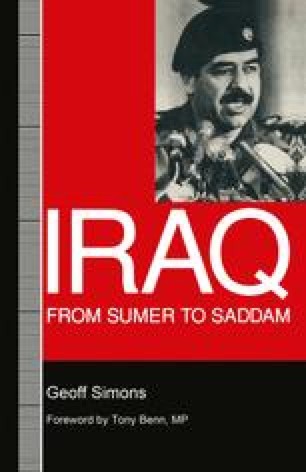 War with the West

In the aftermath of the Iran-Iraq war, faced with a disrupted society and a debt-ridden economy, Saddam Hussein strove to achieve a balance between constructive reform and characteristic authoritarian control. As a way of flushing out political opposition within the country, he offered an amnesty to domestic dissidents; at the same time he invited political offenders outside Iraq to return home. In late 1988 Saddam launched ‘what seemed an Iraqi perestroika’.1 A new constitution was promised and also a range of economic reforms that would relax the Ba’athist grip on the nation. There was even the prospect of a new electoral law that would allow the emergence of a multi-party system, and Information Minister Latif Jasim commented that a free press was now a matter of ‘paramount interest’. Saddam also tried to build on what he declared as the Iraqi victory over Iran, a supposed triumph that had — according to Saddam — established the Iraqi leadership of the Arab world.

Saudi Arabia Security Council Arab World World Order Foreign Minister
These keywords were added by machine and not by the authors. This process is experimental and the keywords may be updated as the learning algorithm improves.

We have about 60% of the world’s wealth but only 6.3% of its population. Our world task in this position is to devise a pattern of relationships which will permit us to maintain this position of disparity. We should cease to talk about such vague and unreal objectives as human rights, the raising of living standards and democratisation.

If Kuwait grew carrots, we wouldn’t give a damn.

I venture to say that if Kuwait produced bananas, instead of oil, we would not have 400,000 American troops there today.